'Disability is not inability' - Cameroonian Woman Shows the Way 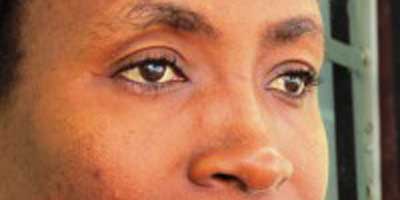 By Zoneziwoh Mbondgulo Cameroon Correspondent for Safe World for Women

“I lost my sight when I was one year six months old,” said Ms. Wirba Amshatu Verbe, currently a transformative leader, mentor and education trainer at the Government Teachers Training College (GTTC), Buea.

For over 30 thirty years now, Ms. Amshatu does not know what an ordinary print paper, notebook or an ink pen looks like. Braille and computer has been her sole weapon for communication.

Grew up in an all-inclusive environment, less sensitivity towards persons with visual impairment, Amshatu had always believed in education as the key for growth and community development.
“Even as a teenager, I believed in teaching as a tool for empowerment. Though disabled, I knew it was not an inability!” She said.

In 2003, Ms. Amshatu made a turning point in her professional life; challenging the status quo and all those who believed that university education was not meant for persons visually challenged. At such became the first student with visual impairment to gain admission into the University of Buea (UB), where she received a BEd (Bachelor of Education Degree) in Curriculum Studies and Teaching/ History (CST/History) in 2006.

Even so, Ms. Amshatu’s pursuit for greater knowledge did not just stop after her BEd. Her desire for teaching continued heavily, so too was her struggle. In a quest to take, her passion to the next level she spent closed to three academic years; that is from 2007 to 2009, struggling and writing the ENS [Higher Teachers Training College] annual entrance examination. Where she finally made it in 2009 and again, became the first visually impaired person to have participated in the teachers training competitive examination (orals and written) as well as to have succeeded and been granted admission at ENS Bambili, North West Region of Cameroon. Note, all these were achieved after a series of negotiation with top government officials.

2 years later, Ms. Amshatu graduated with a DIPEN II (Teachers Training Diploma) in Science of Education from ENS, Bambili (2011) and was posted to Government Teachers Training College (GTTC), Buea in 2012, where she now teaches Education/Child Psychology.

“My life, my struggle has not been easy. I remembered when I spoke to people about my interest in ENS, some friends/colleagues advised me not to. People said I would never be allowed to seat for the examination, talking of gaining admission. Someone asked me how I intend to teach non-blinds as a blind,” says Amshatu giggling with an emotional facial expression. “They even advised me to teach in the Re-habilitation Institute for the Blind Buea. Whereas, deep inside me, I knew that was not my place. I could feel my calling - to teach non-blinds. And that is exactly where I am today! Though I co-teach with a sighted colleague who corrects the scripts.”

Ms. Susana Akango, student of Ms. Amshatu says - “the first day Ms. Amshatu came to class, I knew she is so special and unique. She is always so active, interactive, and engaging with us the student. ”

“Ms. Amshatu is the first visually impaired tutor who has ever taught me. And each day we have lectures, there is something new I learn from her. She is God sent for humanity especially to persons in this teaching core,” says Mr. Ebong Blaise, a first-year student teacher at GTTC Buea.

Indeed Ms. Amshatu is a special person, intelligent, and equal to all task, Mrs. Enow Achare, a co-colleague to Ms. Amshatu says: “I have been teaching for over 24 years but co-teaching with Ms. Amshatu is my first experience though I have background knowledge as far as special education is concern. And I enjoy each and every teaching moment with her.”

Through Amshatu’s mentorship, one young visually challenged woman is now at ENS Bambili, a place that at first was for the sighted.

Ms. Isabel Foyenka, a first year ENS student, and one of Amshatu’s mentee in a telephone interview with me, she says: “Amshatu is more of a sister to a friend. Her story motivated me to pursuit my education. Even after I succeeded in the entrance examination, she has continued to give me words of encouragement. She told me of the challenges, obstacles but that I needed to be perseverance.”

Especially as “Teachers at ENS are yet to be used to persons with visual impairment.” Isabel added, “Things have not been easy as expected. I can’t count the numbers of times I keep reminding my teachers that whenever they write or draw on the board they should not forget that I can’t see.”

Amshatu is the last-born and the fourth girl in a family of six. Hailing from a polygamous home, being the only child with visual impairment in her family, she hopes to see women and men visually challenged face their fear and go for their dream. “I also want to see visually impaired persons begin to challenge our society that thinks when somebody is blind, it means his or her brain is blind too, or that everything has ended for that person.” She said.

Raised by a supportive, and disability friendly family, Amshatu says it helped her overcame the stigma and complex feeling of not belonging. However, the stress of coping without particular needs, she says, remains a major impediment for self-growth. “For instance, the lack of access to brailed textbooks, assistive devices like a laptop [computer], printer, and a scanner has greatly limited me from reaching out to a wider audience likewise bringing spotlight to my powerful story for change.” 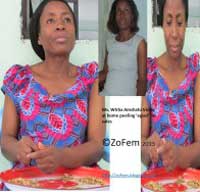 Again she explains, “Each time I have to prepare my lesson note I book in advance for a computer from a friend at the Rehabilitation Institute for the Blind or the University of Buea [UB] UNESCO Lab. This can take me days or even a week to prepare a one-day lecture. Meanwhile, in cases where I need to search online, I can even take several weeks as I would need to ask for someone to take me to the cyber, where [s]he will assist in googling for the information I need, save it in my flash-drive. Which I shall later take to either the Rehabilitation Centre or UNESCO Lab and read since their computers have reading aids; I mean special computer software for persons with visual impairment.”

So far, Amshatu’s works and activism has helped shape the teaching environment in some Anglophone Cameroon academic institutions as provision are now being made to assist persons with special needs.
She therefore remains a living testimony that persons with visual impairment can do home chores, travel and work all by themselves as well as becoming part of social transformation [change].