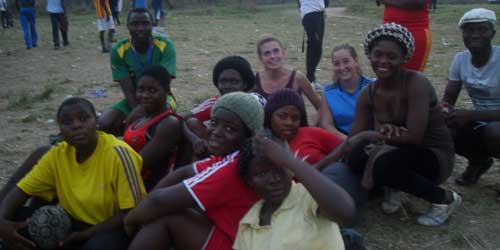 On International Women's Day, RuWCED members participated in a handball tournament as a way of bringing girls together in the community.

On the occasion of the National Youth Day, 11th February, RuWCED’s girls and youths – especially our reproductive health, sewing, and computer students, joined fellow youths from all over the nation to show to our leaders that girls can make a different in a community.

We demonstrated that there can be no economic, social and political empowerment without girls and women being at the centre of such empowerment. We used this opportunity to say no to stigma for women and girls living with HIV/AIDS, gender bias and inequality.

While marching through the grandstand and in the presence of senior government administrative authorities such as the Mayor and the Divisional Officer just to list but a few, we showed case our message in bolded (typeface) flip charts to these authorities and to the general public. Some of these messages included slogans such as:

No to Stigmatization, No to Violence Against Women, No to Female Genital Mutilation (FGM), No to Matrilineal Succession*, Promote Education for the Girl Child, Educating a Woman is Educating the Next Generation, Yes to Women’s Rights, Yes to Gender Equality.

These messages were read by thousands of youths, parents, teachers, and leaders who came out for this occasion.

“Wow, so these government officials could also seat and watch people like me marching in front of them! I thought that since I have never been to school, I will never have the opportunity to march or participate in any public social gathering for my country.”

After the march passed, the RuWCED team gathered at the office in the evening to have a bazaar during which questions were asked on gender-based violence, women’s and reproductive health, the use of preventatives against sexually transmitted diseases (STDs) such as condoms, etc.

At the end of the day, some prizes were given to our 35 winners who demonstrated fine knowledge of reproductive health education, HIV/AIDS prevention, and issues of women rights. These prizes range from RuWCED’s T-shirts, pads and toilet tissues, pens and pencils, exercise books, etc.

“Go women, go girls, together we can make the difference in our communities”

On March 8th 2015, RuWCED joined women all over the world to celebrate and air their voices on a day dedicated solely for women – International Women's Day.

We also participated in a handball tournament (and won the second prize) as a way of bringing girls together in the community.

* In Cameroon, 'matrilineal succession' does not mean that women inherit. Instead, it means that when a man dies, the first son of the man’s sister inherits.