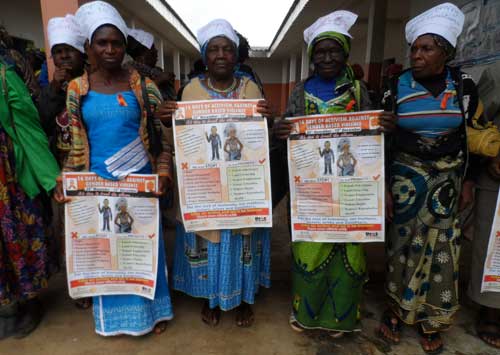 Most of the women in the local communities where we work have no voice in the choice of whom they marry, and there are many cases of early marriages and school-drop-out amongst girls.

Girl children are often considered as a commodity to their parents and are expected to be given out for marriage as soon as “they get ripe”.

Officials of the Rural Women Center for Education and Development-RuWCED, in partnership with the Divisional Delegation of Women’s Empowerment and Family for Boyo, have expressed the need for women in particular – and the entire population of the division in general, to bar the way and denounce human rights violations like rape, sexual harassment, human trafficking, prostitution, early and forced marriages, as well as the maltreatment of widows and orphans.

The representative of the Divisional Delegate of Women’s Empowerment and the Family for Boyo lauded the efforts of RuWCED for striving to improve the “conditions of the woman” in the Division, pledging the delegation’s support to all women’s action.

We used this opportunity also to echo a strong message to the local community leaders to support female inheritance and land ownership – which until now, is still an almost all-men's issue, and we also included women's employment, female education, promotion of widow’s rights, and reproductive health of the woman.

Following the launching of a 16 Days' activism campaign against gender based violence in Fundong on Monday 17th November, 2014, RuWCED, with other women’s groups, called for the elimination of violence against women by raising awareness about gender-based violence as a human rights issue at the local level, and also as a tool to pressure traditional rulers and local government officials to implement promises made to eliminate violence against women.

The Importance of Marriage Certificates

During this campaign, over 250 women came out within Fundong, Cameroon, to raise their voices and make themselves heard.

This ended with a workshop and a strong call for women to make sure that their marriages are secured with marriage certificates to avoid the difficulties most of them go through after the passing away of their husbands.

In July 2014, Miranda, 21 years old and a single mother of three kids, wrote a letter to RuWCED, through our Fundong field coordinator to request for assistance. In her letter, Miranda said:

“Please Sir, I wish to apply for support from your organisation. My name is Miranda, I am 21 years old, mother of three children – all boys. I am jobless without any qualification and not married. I ended my education in form 3. I am orphan of both parents; my grandmother died when giving birth to my mother somewhere in Bansoh, a rural community.

My mother, an orphan at her early age, was taken to the orphanage and was later on adopted by somebody in Bambui. Due to maltreatments, she ran away from her adopted parents and ended up in the street in Bamenda as a prostitute. She gave birth to three of us: two girls and a boy. She died before 2001 and we were taken to different orphanages.

Today, I do not know the whereabouts of my brother and my sister. I have no family.

After the orphanage, life was so difficult. I ended up with an early pregnancy. Now I have three children: the first is 5 years old; the second 2 years, and the third just 4 months. I do not know their fathers and none of them has a birth certificate.

I don’t want to end up like my mother.

I am ready to learn a work or to work somewhere to raise up my children. Please help me. I can also do buyam sellam [small scale retail of food stuffs]*…”

In order to assist Miranda and her three children, we decided to pay the school fees for her 5 year-old child for the year 2014/2015, and set a small ‘call box’ (mobile telephone call and credit transfer business) for her so that she can work and have a small income to sustain her livelihood.

*In Cameroon, buyam sellam is small scale retail of foodstuffs mostly done by women in the villages and semi-urban regions. Basically, these women travel to remote villages and buy foodstuffs which  they later retail to make profits.