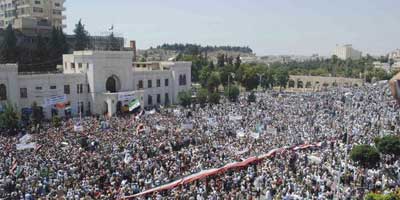 The Syrian regime's ongoing crackdown, including severing power supply to three major hospitals in the central city of Hama, cost the lives of at least 30 premature babies.

Mohammad Al Humaid, a four-month-old child in incubation at the Al Assad Medical Complex in Al Hader district north of the city, died along with four other babies. Amira Al Khoder, the 26-year-old mother, said she had lost her daughter who was kept in the hospital a few days after her birth. She was alerted by the management to come and collect her baby's body.

"The power supply to the hospital was cut off for five days and there was no diesel to run the generator," said Amira, who was in tears.

Doctors at Al Horani Hospital said more than 17 premature babies died in neonatal incubators a day before the army stormed the city searching for protesters.

"We could run the emergency generators for three days but on August 4 we ran out of diesel and when we urged the army to allow the supply of diesel they said they cannot allow diesel tanks to enter the compound," a doctor, who spoke on condition of anonymity, told Gulf News.

"I can't continue in my position any more. I know that the bodies of the prisoners were buried in a site near the military intelligence headquarters in Khalidiya," Al Bakour said.