Guatemalan war rape survivors: 'We have no voice' 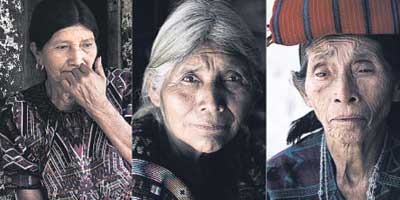 Guatemalan war rape survivors: 'We have no voice'

"When the soldiers found me they grabbed me, took me to the river, and raped me. " Teresa Sic recalls. "On the same day, they raped other women in the village. They burned everything. They tied me up, but I freed myself aided by my five-year-old daughter. I went to seek help. I was hungry and afraid, but nobody would take us in."

Horrific as it sounds, the 58-year-old's story is not a one-off. Between 1960 and 1996 more than 100,000 women were victims of mass rape in the Guatemalan civil war, between CIA-backed rightwing generals and leftwing insurgents, that evetually left 200,000 dead. After General Jose Efraín Ríos Montt grabbed power in a 1982 coup, it reached fresh peaks of brutality.

Many victims were indigenous Mayans

Many victims, such as Sic, were indigenous Mayans, who were caught in the crossfire, accused of collaborating with the guerrillas or targeted simply because their ethnic group became seen as the enemy. More than a decade ago Spain's national high court, which has a long history of taking on international human rights cases – including pursuing Augusto Pinochet and jailing Argentine military officers involved in death squads – began investigating claims of genocide. Yet Guatemala not only refuses to try or extradite Ríos Montt, despite an international arrest warrant issued in Madrid, but he is now a congressman.

As for the rapes, the state refuses to acknowledge them – leaving the attackers to walk freely through the streets and live in the same villages as their victims. "We want the state to acknowledge the truth. We have no voice, and officially the rapes during the conflict never happened," says Feliciana Macario, one of a group of women who have worked for 20 years to bring the rapes into the public arena. Patricia Yoj, a native Mayan lawyer, says that "even the representative of the National Indemnity Programme that was established to make reparations to victims of the conflict has said that he doesn't believe in the rapes".

Women refuse to be silent

But many of the women have refused to be silenced – giving evidence to the genocide trial in 2008, and now, for the first time, their voices will be heard; Spain's national court has agreed to investigate the mass rapes and gender violence as part of the generals' alleged strategy to wipe out a large part of the Mayan population. The investigating magistrate Santiago Pedraz said on Wednesday the rapes appeared to be part of a campaign of terror designed to destroy Mayan society – with soldiers instructed to carry them out.

A plan to eliminate the Mayan people by destroying the women

Campaigning lawyer Almudena Bernabeu, of the US-based Center of Justice and Accountability, says rape, mutilation, sexual slavery and the killing of foetuses were all part of a plan to eliminate the Mayan people. "Gender violence has been used as a weapon to eliminate ethnic groups, and that's genocide," she says. The army and the members of the paramilitary "civil self-defence patrols" tortured the women they didn't kill in order to stigmatise them.

Teresa tells how days after she was raped, she was forcibly taken to a military barracks, raped for 15 days by countless soldiers and given bulls' blood and raw meat to eat.

"To eliminate all the Mayans is a very difficult task, but if you destroy the women you make sure that the population is reduced and eventually disappears – it's one of the cruellest ways of getting rid of an entire people," says Paloma Soria, a lawyer working for the Women's Link Worldwide NGO, which is backing Bernabeu.

Many of the women also endured being abandoned by their husbands as a result of the rapes. One of them was Maria Castro, now 59, who was with her two children – one just a baby when she was horrifically assaulted.

"The soldiers ambushed me.

My little girl was with me.

She was very frightened and she cried, but the soldier threw me to the ground. I remember there were three of them who raped me, but I don't know how many more because I lost consciousness.

When I came to, I saw them pick up their guns and leave hurriedly for some other place. My daughter helped me by carrying her little brother, but she was still crying. She saw everything."

When Maria made it home and told her husband, he rejected her, saying that if she had come back alive, it was because she had let the soldiers rape her.

Others have faced horrific retributions from their attackers for their willingness to give evidence. "They point their fingers at us, they insult us, and some of the men who raped us now laugh at us," one victim says. Castro breaks down as she tells how her son was murdered after she travelled to Spain to give evidence.

Determined to speak out although violence persists

María Toj, 70, another victim, says the violence hasn't stopped, but she is still determined to speak out. "They tortured me and my son. They burned everything, leaving me with nothing but my dead husband and my pain. I hope our efforts will stop this from ever happening again."

Jacinta Guarcas, 65, lost seven of her eight children in the conflict, when they were forcibly displaced. One was killed by soldiers and the rest starved when they were forced to flee into the mountains after their crops were burnt: "First I buried my one-year-old son since I didn't have enough milk for him because we had nothing to eat."

The effect of the impunity for the rapes and killings can be seen in the deep scars on Guatemalan society.

120 cases of rape, torture and even dismemberment, this year

In 2010 alone, 685 women were killed. So far this year there have been 120 cases of rapes, torture and even dismemberment.

"This trial will help open a debate about feminicide, because the lack of justice actually contributes to increasing gender violence," says Bernabeu.

Only about 1% of these cases go to trial in Guatemala. "There are times when foreign or international courts are the only recourse for victims, since they can get no justice in their own country," she says.

The lawyer will bring Patricia Sellers, the woman who succeeded in having rape defined as a weapon of war at the trials for genocide in the former Yugoslavia and Rwanda, to be an expert witness.

While Spain may be unable to extradite the accused, international arrest warrants at least prevent them leaving Guatemala. Pressure from Madrid has forced Guatemalan courts to start trying human rights cases from the war. They may eventually be persuaded to investigate the rapes. In the meantime, the courage of these women, who face rejection for speaking the truth, will help others who suffer rape as a weapon of war to become more visible.

"This sets a precedent for national courts around the world. Hopefully we will now see how it spreads to other countries from Spain," says Soria. "Society puts the rape and torture of woman on a par with stealing cattle or burning crops. This must change, and these women have to stop being invisible."