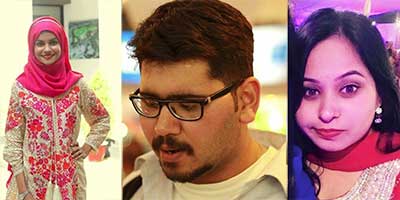 Prakhar Misra, a Teach for India fellow from Mumbai writes about the immense respect he has developed for teachers in Pakistan, thanks to his interactions with Teach for Pakistan fellows Hafsa Alvi and Tooba Hatif Farooqui.
Source: Friendships Across Borders | Prakhar Misra

It was a very lazy day, the 16th of December, 2014. I came back home from school.
Teaching in a low-income private school ensures that you do not forget your kids when the school day ends. Having to check their papers after school hours is a constant reminder of where they are and where they need to be, which is what I was doing almost the whole day or whatever was left of it.

Sometime during the day, the news broke out. A horrific incident of the killing of school children in the city of Peshawar in Pakistan was pasted across news channels in India. What’s more, the killings took place in an army school. The attacks were in retaliation to some sort of an ambush in North Waziristan by the Pakistani Army. The epitome of safety in Pakistan instantly became the torchbearers of sorrow. At the end of the day, 132 school children and about 13 teachers and administrative staff including the principal were exterminated within the premises of the school. Their memories, however, gave strength to thousands of us watching this from faraway on our television screens.

Social media, Facebook and Twitter particularly, were erupting with condemnation and condolences alike. And I remember thinking what this meant for the teachers in Peshawar and Pakistan in general. It would be a surprise if parents continued to send their kids to school, for the fear of attack on any school would be a huge deterrent to kids’ education, making parents wary of their kids’ safety. But, kids continued to go to school. And teachers continued to teach in various parts of Pakistan, Peshawar included.

Sharing the reality with our kids

This is when it hit me — the kind of nerve and amount of courage it took to do a task as basic and mundane as going to school. I could immediately draw a parallel to the kids I teach here in India. I realized how lucky we were just to get to school without any fear or worry. And this needed celebration! I wondered what this meant for our kids. Thanks to the Indian media, they would be conditioned to always think of Pakistan as doomed land and Pakistanis as our enemies. But, of course, reality was different. We just had to find a way to share this reality with our kids.

Thus, began the journey of Project Anhad, which aims at starting and sustaining a dialogue between school children of India and Pakistan through letters they write to each other. In February 2015, 1,300 letters from the children of Teach For India reached Pakistan under the aegis of Teach For Pakistan. In August 2015, we will receive letters from Pakistan in India. And this exchange will continue. Children from both countries will write back to each other again and again and again.

Personally this journey has been more than enlightening. I have gotten to know so many things about Pakistan that I would have otherwise not known. Tooba Hatif Farooqui and Hafsa Alvi, two Teach For Pakistan fellows, who have been my partners in crime in this project, have been my window to the beautiful life in Pakistan.

Through multiple Skype and Google Hangout conversations, we have started talking very closely about life across borders. I did not know that they celebrated Diwali in their schools, that they burst crackers and lit sparklers or ‘phuljharis’ with their kids. They have to teach and track almost 100 kids in their classes spread across multiple sections, which is a humungous task.

I am now acquainted with at least 10 different areas of Karachi. I also understand how the education system in Pakistan works, their joys and their challenges. Our conversations revolve around our kids – what they learn, how they are taught, whether their parents are supportive or not, etc.

Invariably, the teacher in each one of us comes to the fore during our conversations. Education is a reflection of the worlds we live in, and our conversations are a reflection of the kind of education we are given. My respect for the work they are doing for their country grows with each conversation that spans over an hour. The kids, the parents and the teachers are filled with positive energy. They are willing to overcome all that comes in their way to reach where they want to.

People are loving, happy and contented

Going beyond the media rhetoric, I have started appreciating the way people function in Pakistan. Despite the chaos and disorder, people are loving, happy and contented. It is amazing to experience what they experience through my conversations with Tooba and Hafsa. I shall always cherish the conversations we have had and look forward to more of these.

It is largely politics that distances Indians from Pakistanis. Otherwise, we are very happy and willing to share our stories, ideas and thoughts with one another. I realize there are more people in Pakistan who want to accept Indians as their brothers/sisters than not. The hatred is caused by a few anti-social elements that are highlighted by the media. Thus, they become the face of Pakistan, masking the inner beauty it carries. The charade, however, is only ephemeral in time.

My learnings strengthen my resolve to go beyond the biases I carry against different races and communities, and reach out to them in a spirit of love to celebrate humanity. Talking to people across the border has helped me dig more into my own self. I would like to urge everyone reading this to make at least one friend across the border, and stay in touch until eternity. What you experience will tell you more than an investigative journalist ever could.

Prakhar Misra is currently a Teach For India fellow in Mumbai, prior to which he completed his Engineering and a founded a social media marketing company called ADDO.
He is also the co-founder of a media organisation called Janhitt Mein Jaari.
Read more blogs from Prakhar

Friendships Across Borders: Aao Dosti Karein is a member of The Alliance for a Safe World