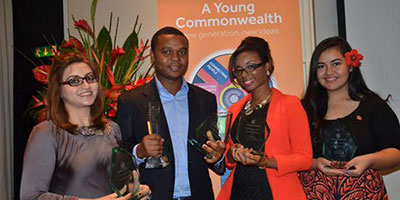 Gulalai Ismail, Founder and Chaiperson of Aware Girls wins Commonwealth Youth Award in Recognition of her efforts for Strengthening Democracy and Human Rights in Pakistan

Gulalai Ismail, age 28, was chosen as the winner of “Youth Award for Excellency in Development” from the Asia region out of hundreds of extraordinary young people from across the Commonwealth countries. The award recognizes outstanding young people under 30 whose development projects and programmes have had significant impact on their communities, countries and across the globe. Miss Gulalai along with other award winners also had the honor to meet her Highness Queen Elizbeth-II, day before the award ceremony.

She also works on countering violent extremism in the Khyber Pakhtunkhwa Province of Pakistan by promoting non-violence, pluralism and tolerance. She is a fierce advocate of the role of young women in peacebuilding and development. She believes that if young people especially young women are not engaged in the decision making processes then the dream of living in a decent, developed and peaceful world can’t be achieved.

Speaking to Geo News, Gulalai said the fact that she had been given the award meant the voices of Pakistani and South Asian girls working for their rights was being recognised.

While receiving the Award Miss Gulalai Said, “While I receive this award, there are millions of girls who who are denied their right to education, are forced into marriages, are becoming victims of domestic abuse and violence in their communities.” She urged everyone to break the silence and speak up for supporting the cause of the human rights and political participation of women and girls.

In 2013 she received International Democracy Award in the US Congress, she was invited by the White House to attend Obama Civil Society Summit in 2013, In 2014 she received the International Humanist Award and is one of Foreign Policy Magazine’s 2013 ‘Leading Global Thinkers’

Aware Girls is young women led Organisation working for women empowerment, gender equality, and peace in Pakistan. We are working to strengthen the leadership capacity of young women enabling them to act as agents of social change and women empowerment in their communities.