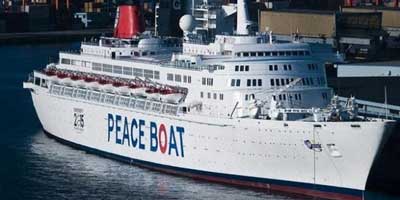 Promoting & Preventing Disasters to Save Lives

The objective was to promote resilience related to disaster management.

In Peru, Castorina Villegas and I were the organisers. It was a success! We had the opportunity to invite the mayors and officials of the government to share the work they are doing in order to prevent disasters to save the lives of the population. We were also successful in gaining the commitment of the 120 participants and children who were present.

The Quipu of Latin America

As reported on the Peace Boat's website, during the event in Callao, Peru, on January 27, the participants received the 100-meter long "Quipu of Latin America and the Caribbean for Resilience," a special knotted cord that contains thousands of messages from young people in Latin America. The Quipu will be transported to Japan on Peace Boat's ship, where it will be presented at the world conference in Sendai in March 2015.

The Incas used the quipus, to account for the number of animals they had – in this case, the children prepared the quipus to present their desires and accomplishments with the issue of Disaster Programmes. For example, they said we accomplished participation in the simulacres (activities made to prevent disasters, done usually in the schools, work areas) to prevent disasters and to learn about how to found the evacuation areas in time of disasters happened like earthquakes.

The President of The United Nations Regional Office of Americas and Caribbean congratulated me and Castorina, who is the President of Women United for a Better Community; we both convinced the mayors to participate and they did.

We are going to elect the National Federation of Grassroots women the in March. We, being those who motivate and sensitize the grassroots women to become a strong organization to defend of their rights of land property and housing.

And we are going to three more regions: Cuzco, Piura and Cajamarca to train more grassroots women and also to visit the local governments to invite the mayors to register their local governments in the resilience campaign of the United Nations.

On 7th November, 2014, as representative of the NGO Estrategia working with the grassroots women of Women United for a Better Community, I was invited to participate in the United Nations Habitat Program named Global Land Tool Network (GLTN)

The UN Habitat programme will prepare a global methodology including the strategies and tools to disseminate in other new places taking the women as principal actors of the development required to live with dignity.

Peace Boat and the UN promote resilience from Chile and Peru