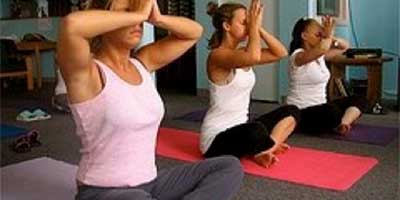 In 2011, yogaHOPE established a collaboration with the Mental Health Department of MCI-Framingham, the only women’s correctional facility in the state of Massachusetts.

MCI-Framingham is a medium-security correctional facility for female offenders that houses both women awaiting trial and women serving terms of imprisonment.

In 2012 the organisation launched a pilot of it's TIMBo Yoga program, the first ever inside a women’s prison. Phase II of the program started in March 2013 with 14 women who are being trained as Certified TIMBo Facilitators.

And the program continues to go from strength to strength..

Think you have nothing in common with a woman in prison? Think Again....

"On my way out of the building I run into Corrine, a young black woman who is usually accompanied by her black lab. Today she is not. Corrine—a soft spoken woman with a gentle disposition, smiles brightly and tells me it’s nice to see me. It’s nice to see her too—I have missed her though it’s only been a week.

She tells about an article about yoga that she had recently read in the Boston Globe. She recounts the nuts and bolts of the article— the explosion of yoga, the benefits of mindfulness practices and the disparity in who has access to the practice—low income and poor communities having much less access to yoga studios and classes.

She smiles again and says that she is so glad she is a part of the yoga group. My colleague Meghann asks her if she is planning on doing the training to teach the yoga program and her face brightens as she says yes. After a pause she adds, “I’m here for ten more months, so yes.”

Corrine is an inmate at the MCI-Framingam Medium Security Correctional Facility in Framingham Massachusetts and she has just completed an 8 week integrated yoga and mindfulness program for women. Twice a week Corrine arrived to our group with her black lab—a dog that she is training to eventually become an aid dog for the disabled Americans and returning combat vetrans. At the finish of each class, as we guided the women through a meditation, Corrine (along with the other women) would lie peacefully while her dog curled up next to her and for that moment in time she felt at peace—and she felt whole—and she felt loved.

The women in our group ranged in age from twenty something to sixty something. They had been in the prison from just a few weeks to over twenty-five years and they were there for everything from drug related crimes and OUIs to more violent offenses but they had one thing in common. All of these women had experienced abuse and trauma—everything from early childhood physical abuse and sexual abuse to inter personal violence. Nearly 90% of the women in the group reported a history of domestic violence.

We didn’t talk about these things in our group. Instead we talked about how our bodies felt. Together we pointed to areas of our bodies that felt uncomfortable when we thought about our fears and guilt and shame and resentment. We breathed into those places and noticed that we could create change inside ourselves and they noticed how that changed the way we felt,  thought—and acted. We practiced gentle yoga and sometimes the women would cry and feel confused and scared. We explained to them that this happens because their bodies feel safe enough to let some of the stress and trauma that has been built up over the years be released. We allowed them to know that they could let these things—go at their own pace, in their own time—safely.

Corrine and the women in her group are no different than me. Yes, they have made different choices in their lives and they ended up in prison—but deep inside of us all there is an innate wisdom and a desire to feel love and compassion for ourselves—and then others. This—our true nature—becomes suppressed under layers of fear, anger, resentment, confusion and all of the other emotions that develop and become overwhelming as a result of early childhood stress and trauma. The way needs to be cleared—and not by means of retraumatization, as so often happens in correctional facilities. This is what we do in our program—help them clear the way. And in the process we (the co-facilitators of this program) continue to clear the way in ourselves. We do it together.