Unspeakable Inequalities: Between the Street and the Door 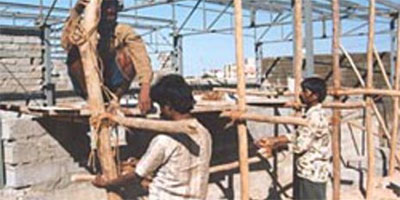 Unspeakable Inequalities: Between the Street and the Door

Katheeja Talha works as a researcher in a project, studying the long term impact of post disaster reconstruction in rural settlements

With the exception of the half an hour in the morning she leaves the house to collect fodder, Tamiben Wankh is confined within the walls of her homestead plot. She cooks, she cleans, she embroiders, washes, takes care of her children and her father in law within this admittedly generous piece of land. Ghunghat firmly in place, she opens the high gate of her house, heads down the street, then takes a parallel lane to avoid the paan shop where all the men sit and walks to the farm. When asked if she was satisfied with the new village, she says that ‘they’ didn’t rebuilt the village, only houses.

Ask her about the old village and her anecdotes are never ending. From the construction of her former home and her neighbours scandals to the functioning of the temple body, she has an informed opinion on everything. There her responsibilities extended beyond the household. She would meet her relatives in their community chowk, perform her daily pooja at the kuldevi mandir and end the day by singing bhajans in the temple chowk.

In highly stratified society in rural Gujarat, Tamiben could afford this limited participation because of the porosity of the boundaries between house and verandah, verandah and chowk,  chowk and  neighbourhood.

The normative values of the society might relegate the woman within her house. But when privacy is so layered, in reality most women learn to negotiate between them and find a space for their own. In reconstructed villages, especially relocated villages, these nuances of space, the gradual transformation from  inside to outside, private to public, between the house and the street are lost and along with it, the opportunity to push the boundaries of what is accepted. The village is then reduced to the house and the street separated by a wall.

While this absurd reduction might be seen simply as careless planning, the official statement of the agency reveals this as an attempt to discourage the formation of caste based neighbourhoods. This was supported by the lottery system of allotting houses – a random unbiased process that would slowly tackle the problem of caste. (Villagers later exchanged their houses to recreate those very neighbourhoods even before they moved in and eventually the Dalits chose to move back to the old village.)

The United Nations has recognized the opportunity that lies in reconstructing settlements to change historic patterns of inequity, to ‘build back better’. But without a careful, dedicated understanding of the forces at play, the structures that exist and the manner in which patriarchy and caste hierarchy reasserts itself, many efforts undertaken by agencies can become failures.

These failures are seen in reconstructed villages across the country where active, well intentioned policies and methods have increased the disparity rather than dispelling them. Bringing in piped water connections and sanitary latrines to every household is a considerate necessary proposal to reduce the problem of having to leave the house for essential activities. But they also deny women two reasons to go into the wilderness and enjoy unsupervised time with her peers and friends. In a few villages, the toilets remain unused even after a decade.

In one of the very few public roles assigned to them in Gujarat, women were responsible for performing the daily pujas in their local kuldevi mandirs. This task legitimized their presence in public space and was often the only means of engaging with the physical village and its public chowks. With new settlements relocated away from the often permanent locations of temples, this role too has become a man’s responsibility.

In coastal Tamil Nadu, the imposition of ‘no building zones’ have  increased the density of  most  settlements. This could only be achieved through the felling of thousands of trees whose shade and produce are of monumental importance to the socio-economic, mental and physical well being of women. The space surrounding a homestead plot was shaded and demarcated by trees. These were the communal spaces that replaced the chowks of agricultural settlements. Without the thresholds of trees, the village here is again reduced to the house and the street.

The problems do not only arise with the use of space, but begins with the construction of space.  Industrial building materials and technology that are oft employed by various governmental and non governmental agencies do not require the periodic and labour intensive maintenance of a mud plaster, thatch roof or a lipan flooring. But those are tasks that often showcase the skill and participation of the woman of the household. Especially in segregated societies where her physical presence may be barred, her work attest to her presence, individuality and in some cases, narrate her personal biography. By using materials and technology that require monetary capital over skill, the construction tasks shifted from a woman’s realm into a man’s domain.  In coastal settlements, where thatch weaving is often a crucial livelihood for elderly women, this shift has severe consequences.

Apart from these are the escalations of other violence – the increase in alcoholism and domestic violence that is consequent of traumatic displacement, the risks of rape and harassment in temporary community shelters, forced land acquisition from widows and their subsequent destitution.

The fluid definitions of patriarchy and tradition permit them to mutate into many forms and manifest themselves in any structure. Which is why the same institution that would shun women’s participation in public life might discontinue them from their studies to send them for work in a factory during a drought or opt for housing and settlement layouts, building materials and technology that reveal aspirations of  an urban, modern identity.

Without the support of an existing or sensitive new institution, the narratives of external agencies have often been appropriated by different forces to reinforce a patriarchal ideal of the community rather than the alternative that was aspired for.

The intent here is not to condemn the aspirations which govern the implementation of such initiatives . Nor is this an attempt to encourage a romantic notion of traditional space making patterns, which are fraught with problems and violence themselves. But by aiming for a specific, rigid and tangible outcome, creativity and real observation and, therefore, sensitivity and compassion are often curbed. The unused ruins that litters the landscapes of reconstructed villages are often relics of definite, radical and ultimately naïve ideas of instant reform.

In a climate of shifting roles and shifting rules, perhaps the answers lie in that grey space of thresholds, in the accommodating breadth of ambiguity.   Transformation needn’t begin with a new paradigm imposed from outside. Maybe it begins with not seeing women as passive victims or beneficiaries and giving ourselves the opportunity to learn from them. By identifying the existing patterns of resistance and participation  and working with the kinks and gaps of the the current paradigm.  Simple things of daily consequence. By strengthening the access to spaces and places where a woman’s presence is tolerated, if not welcomed. By creating institutions for long established activities that demand the resources of the settlement. By creating opportunities of encounters and dialogues, opportunities to linger and meander. By making visible the ‘trivial’ private world in the vast public realm.