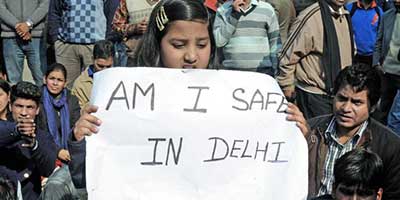 Creating safety involves much more than just responding to violence. It is important to create the conditions by which women are able to move about safely and without fear of violence or assault.

Fear often plays a key role in women’s experience and access to the city. Therefore in order to create greater levels of safety and comfort, both actual violence and the fear of violence need to be addressed.

Women’s safety  in the city tends to come to the forefront when there is a particularly horrific and extreme case such as the gang rape in Delhi in December 2012 or the case of molestation in Guwahati or the Shakti mills case. The media highlighting of these in the past few years has  also played a role in this.

Research has shown that many factors play a role in determining women’s access to the city including urban design and planning, community involvement, improved policing, usage of space etc.  For example, use of spaces for a diversity of purposes is often more conducive to the production of safety. Planners and sociologists argue that this diversity ensures that different kinds of people use the space and that it is used through all times of the day. Jane Jacobs (1960) states that the problem of insecurity cannot be solved by getting people off the streets and instead we need to ensure “eyes on the street” as the solution to lack of safety. She advocates for diversity in the use of public spaces as a way to ensure that there are at all times different sets of users of a space thereby ensuring a level of safety and comfort.

The data from the National Crime Records Bureau show that cities with a population of more than one million tend to have a higher rate of crime in general. There was a total of 33,789 cases of crime against women were reported from 53 mega cities out of 2,28,650 cases reported in the country during 2011. Among them, Delhi accounted for 13.3% (4,489) of total such crimes followed by Bengaluru 5.6% (1,890) and Hyderabad 5.5% (1,860). The proportion of IPC crimes committed against women towards total IPC crimes has increased during last 5 years from 8.8 % in the year 2007 to 9.4% during the year 2011. Thus clearly official data shows an increase in the reporting of crimes against women. [1]

But we recognise that reported crime is probably only the tip of the iceberg and violence against women and girls is a much more pervasive phenomenon than demonstrated by crime statistics. Several research studies have been conducted over the past few years to understand women’s experience of violence in public spaces in cities. In Delhi Jagori has conducted several research studies and safety audits to better understand women’s  actual experience and response to urban situations.[2]

Delhi: 95% of the women had experienced some form of harassment

In Delhi a 2010 study with over 5000 men and women showed that over 95% of the women had experienced some form of harassment in the past year while a similar percentage of men reported having been witness to sexual harassment. Almost 2 out of 3 women, including girls reported facing incidents of sexual harassment between 2-5 times in the past year. School and college students in the 15-19 age-group and women workers in the unorganized sectors are particularly vulnerable. It was reported that harassment occurs during day and night and in all kinds of public spaces, both secluded and crowded.  Further, the most common forms of harassment reported  were verbal and visual and physical (staring, passing comments, catcalls and touching). Public transport, buses and roadsides were seen as most the vulnerable spaces, thus making the process of everyday life fraught with danger and the possibility of violence. Both witnesses and women respondents agreed that women face maximum harassment while using public transport, bus stops and on the road.  Parks have also been identified as unsafe by women. The experience of women in cities is diverse and determined by the intersection of gender with other identities.

It is important to recognise that cities are sites of production and consumption that are gendered in their very imagination. The gendered nature of cities and urbanisation is visible in the exclusions, lack of opportunities, infrastructure and services which impact women’s every day experience of living and moving around in a city.  In the face of growing urbanisation our cities need to be designed , planned and governed in ways that are inclusive and safe for all.  Through the process of conducting over a hundred safety audits over the past several years in Delhi, and then through partners in Kerala, Kolkata and Mumbai, some of the key elements to building cities that are inclusive, safer and accessible have been delineated including design of public space, social usage, nature of policing and importance of community engagement.

Conditions of safety and inclusion

Therefore addressing violence against women cannot be seen only as the responsibility of the police or the women’s ministry only, but has to get onto the agenda of related stakeholders such as urban planning, transport, education, health among others. Responding to violence is  one part of the strategy; equally important is the need to create conditions of safety and inclusion.

In almost all the cities, it was found that public spaces are poorly planned and designed for the usage of the most vulnerable. Women and others in low income areas have  the least access to institutional support and often are faced with bias and even violence.  Recent studies have also shown the increased vulnerability of women in low income settlements to violence because of poor or nonexistent infrastructure and services. A study in two resettlement areas in Delhi demonstrated how the acute lack of essential services such as water and sanitation renders women more vulnerable to violence.[3] Beyond this, for women living in poor neighbourhoods, often productive and reproductive  activities are carried out in the same spaces and cramped homes lead to the blurring of the distinction between private and public spaces, making it therefore important to speak of safety and urban space in a more nuanced manner.

The discourse around safety must be located within a broader framework of rights. Lack of safety in fact prevents women from fully participating in the city. Thus addressing lack of safety or finding solutions also need to be posited within a framework of rights.  Women cannot be told to find their own solutions for their insecurity.  Solutions like carrying pepper sprays or learning self-defense are individualized solutions which are not based on the notion of safety as a right. For women, in fact the right to live, work, move around and participate in the city is premised on the right to safety. The overt and covert forms of violence inflicted on women in cities keep their mobility and freedom perennially curbed. The absence of women in the imagination of the city can only be challenged by their continuous presence in city life and pushing the boundaries that seek to control where and how they may be present.

Kalpana Viswanath is a researcher who has been working on issues of violence against women and safer cities for women for over 20 years. Kalpana has been involved with UN Habitat, UN Women and Plan International in planning safe city programs in Cambodia, Pakistan, Kerala, Mumbai and Kolkata. She is the Chair of the International Advisory Committee of Women in Cities International and has published widely.