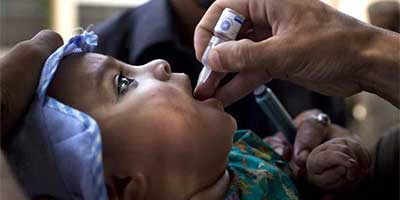 Every year on 24th October, people from all around the world, celebrates World Polio Day.  The world certainly deserves celebrations as the deadly disease has been decreased significantly and it is estimated that barring three countries, Polio has globally been eradicated.

However, the occasion is a reminder that our fight against the disease should be more consistent and strong enough for a final push to wipeout the deadly virus from the face of earth. Historically Polio has been a major cause of death and disability among the children, especially in poor and developing countries.

There is no cure for polio once a person becomes infected.  Proper and timely vaccination is the only way out to prevent and protect the children from the disease.

According to the World Health Organization (WHO) in 2012, only three countries, Afghanistan, Nigeria and Pakistan, remain polio-endemic, down from more than 125 in 1988.

The government, civil society, media and people of Pakistan are well aware of the importance of eradication of Polio at its earliest.  There is an understanding and realization, at the highest level, that deadly Polio is a constant threat for our future generations.

It is a fact that coordinated efforts of the federal and provincial government, international agencies, grassroots organizations and media have improved and strengthened the Polio immunization campaigns.

It is highly unfortunate that small section of Pakistani society is against the polio eradication efforts.  These people mostly are the exponents of rigidity, have even made fatal attacks on anti-Polio health workers in different parts of the country.  Consequently, these attacks have negatively influenced the continuity of Polio eradication efforts in vulnerable areas.

Influenced by the propaganda and fear of attacks, in many communities people have started viewing polio drives with suspicion and therefore refusing to vaccinate their children.

Emergence of a number of Polio cases in recent years from different parts of the country is certainly a result of not achieving the target coverage for Polio immunization.  One can argue the shortcomings of the campaigns to administer the vaccine to required number of children; however, negative propaganda and violence against anti-Polio workers have also contributed in under par coverage of immunization drives.

On the occasion of World Polio Day we must acknowledge the services of our police officials who are trying to protect the anti-Polio workers in vulnerable communities.  These police officials are working for a greater cause and their services should be acknowledged at national level. Similarly we should praise the health workers, especially lady Health Workers, who despite of all odds take the risks and perform their duties with utmost sincerity.

Eradication of Polio from Pakistan is a great challenge for all of us.  It is high time that all political and religious parties should get involved in anti-Polio campaigns and collectively dispel negative impression against the vaccination drive.

The role of religious and prayer leaders is also very crucial and therefore the federal and provincial government should hold dialogue and get their support in encouraging vaccination among respective communities.

We have to understand that an educated and healthy generation will only ensure lasting development in our country. And we, as a Pakistani, should stand as a unit to convey the message that we will not let our children remain uneducated and unhealthy.

Pakistan has done a great job in minimizing the cases of crippling Polio in the past and with coordinated and consistent efforts of all segments of the society; the country will eradicate the polio in near future.

Amir Murtaza is a senior researcher, analyst and writer on social development issues, especially pertaining to women, youth and children. Amir is the Executive Director of Social Research and Development Organization (SRDO), Pakistan.

He can be reached at