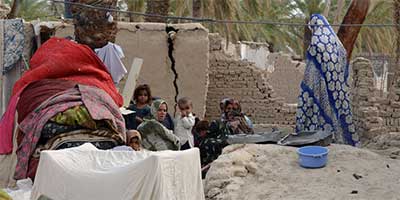 On September 24th a powerful earthquake, with a magnitude of 7.7, struck many parts of Pakistan. However, the province of Balochistan has received the greatest wrath of Mother Nature.

So far the authorities have confirmed more than 350 deaths and it is estimated that the disaster left thousands homeless. At least 300,000 people had been badly affected, mainly in far-flung areas of Pakistan’s largest province, Balochistan. The province covers 45% of the country’s total area with very scattered population.

The major deaths and injuries are reported from Awaran and Kech districits with Awaran facing the worst damage. The mud-built homes in which majority of population live, did not give any resistance to the powerful earthquake. It is reiterated that Pakistan has witnessed a number of natural disasters including torrential rains, floods, and catastrophic earthquakes during the last eight years.

It is important to mention that a 7.6 magnitude quake in 2005, centred in Kashmir, had killed at least 73,000 people and left several million homeless in one of the worst natural disasters to hit Pakistan.

An NGO official informed that houses made of mud and bricks had collapsed instantly the tremors struck and caused death and injuries of their inhabitants, including women and children.

A news report mentioned that, “10 children were taken out alive from the rubble of a collapsed madrassa in the Awaran district of Balochistan while 15 children were found dead.”

Pakistan’s military and the officials of Pakistan’s National Disaster Management Authority (NDMA) have started relief operation in the affected areas. The military helicopters are also taking part in rescuing the people from disaster affected areas.

The provincial government has also ordered a massive relief and rescue operation. However, a government official informed that aid workers are facing severe hindrances in providing relief services to the affected population. He added that the earthquake had badly affected the communication network in the area.

The local hospitals have limited capacity to deal with the patients and do not have the facility to cope with the demands of such a huge disaster. Therefore, authorities are trying to shift the injured people to nearby hospitals.

The lack of medicines and professional health workers has become an issue. It is also reported that many families have limited access to food, drinking water and shelter and many local charities are involved in relief efforts.

The continuing insurgency and lawlessness in Balochistan is a factor. Few large aid groups and charitable organizations work in the affected region because of threats of kidnapping and violence.

But it is sincerely hoped that the current relief and rescue work will continue without any obstacle.