Porridge and Rice (Uji Na Mchele) is a UK based charity working to provide a feeding programme for school children in Nairobi, Kenya.

Our aim as a charity is to improve the education and learning environment provided by community schools in the slums of Nairobi.
To this end, we aid in the building, management and running of schools, feeding of the pupils, and training of teachers.

Porridge and Rice currently partner with three schools and aims to add at least a school a year.
Our aim is to enable each of these schools to provide a quality education to each of its pupils, as already stated, by removing barriers to education and also by providing resources that facilitate education as

To enable each child in the Nairobi slums to receive an education that provides the skills to break the cycle of poverty and deprivation by partnering with schools to remove barriers to education and supplying resources for education.

In 2012, Ken Surridge's daughter Tessa was applying to university in the UK to read medicine and needed to get work experience. She decided she wanted to do this abroad as a volunteer.


Her father, who had previously lived in Southern Africa for 20 years, started looking for volunteer opportunities for her, and after a lot of research found her a place in Nairobi, Kenya, helping in an HIV clinic.

The experience was life-changing, and the following year, Ken - a teacher - was approached by two of his students for advice about volunteering and he suggested Kenya.

They loved the idea.

Soon the numbers had grown, and in October 2013 Ken and nine students arrived in Nairobi, in the early hours of the morning. Just over a day later, the team found themselves in an HIV clinic in Ngando, a part of the Nairobi slums, learning about how this disease is devastating Africa.

The poverty in Africa looks dreadful from the UK but it is easy to change the TV channel or turn over a newspaper page, and thus easy to put out of mind quickly. 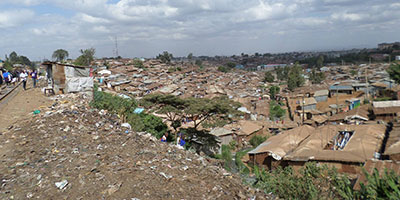 View over slums in Nairobi

By contrast, when the team sat in a tin shanty shared by two adults and eight children with room for a single bed, two cheap plastic chairs, a small parafin stove the poverty becomes an unavoidable reality.


And when you add to this - no running water, electricity, sanitation  -the struggles of daily life are horrifying to see.

Each night after a long day of volunteering, the team would talk about the people, visits and tasks of the day. It was during these discussions that the idea of forming a charity was born.

Back in the UK

Back in the UK, the team met to discuss ideas on how to proceed.
The overriding desire was to do something that would result in long term change. Something that would enable people eventually to become independent of any assistance. Something to enable Kenyans to change their own lives.
After much deliberation, the answer was clear - education.

Education provides children with skills that they can use for the rest of their lives. Studies by the WHO show that there is a direct relationship between standard of living in adulthood and levels of education for people born into poverty. 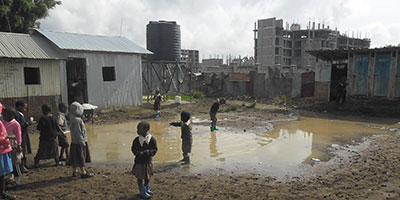 The playground at Glad Kids School after the rain

While in Nairobi, the team visited many schools, and they were struggling. Most of the classrooms were no more than tin shacks and too small for the number of children crammed into each one. Facilities were rudimentary at best with one school having to teach by candlelight in the early morning because they could not afford the cost of cables and the installation of electricity.

None of the schools had running water, and toilets were very basic when they existed. Classroom furniture was both extremely simple and often in very poor condition. In spite of the conditions, the children were delightfully friendly greeting the team enthusiastically and sincerely.

Many of the teachers demonstrated both talent and commitment in the clasroom but simply did not have the money to pay the necessary university tuition fees of around £200 per semester.

The need in the Nairobi slums was patently obvious but where to start was not so easy and took careful thought. From talking to schools and discussing the barriers to education, it was decided that the most pressing problem was hunger.

The school children were incredibly keen to learn. Several had a long walk to school each day, up to two hours, and yet they arrived on time without complaint then sat four to a desk designed for two in a dimly lit classroom. However, each day many of the children arrived at school having had little or no breakfast and with no prospect of lunch because of poverty and neglect. Complaints about stomach aches abounded. Hunger and its consequences, made it very difficult for children to concentrate let alone perform well academically. 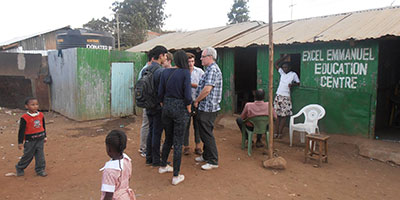 Volunteers at Excel Emmanuel School in 2014

At Excel Emmanuel, a community school in Ngando, the team was extremely impressed by the Head, Titus Kinongo, and Deputy Head, Mary Kinyanjui, of the school. Both of them were very professional and totally committed to the students, making personal sacrifices for the school.

Very few of the teachers have had any formal training on how to teach, in fact, most have no more than form 4, a high school diploma. Those that did have qualifications either had a diploma in teaching the youngest children or a government qualification called a P1. None had any formal qualifications that would enable them to teach in state schools, like a degree in education.

They made it an easy decision that Excel Emmanuel would be the first school to be supported by Porridge and Rice. 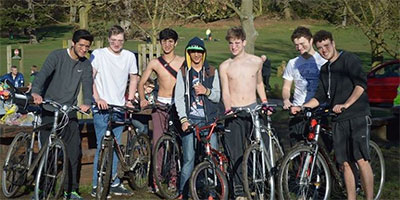 The team began a concerted program of fundraising events including a sponsored cycle ride in Richmond Park in March, bagging customer groceries at Tesco in April, a petting day in May, a 5-a-side football tournament in June, cycling from London to Paris in August, and a car-boot sale in October. In addition, the team handed out free balloons in the borough throughout summer to raise awareness of the work done by the charity.

With the money raised, Porridge and Rice launched a feeding programme for Excel Emmanuel in March 2014. Porridge and Rice bought pots and a Jiko (cooker), mugs, and bowls for the school. In addition, Porridge and Rice agreed to pay the salary of a cook and for weekly deliveries of food. The 350 pupils of the school have received breakfast, lunch, and a piece of fruit each school day since. 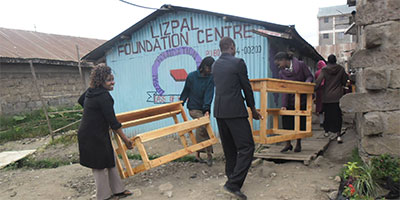 Desks arrive at a school

Porridge and Rice also funded improvements to the facilities of Excel Emmanuel. A kitchen has been built, electricity has been installed, a concrete walkway connecting classrooms, and 10 new desks for the younger classes. There is still a lot of work to be done.

In July 2014, Porridge and Rice extended support to a second community school, Glad Kids. Pots and a Jiko were bought, and food deliveries arranged to feed the 120 pupils of Glad Kids.

By December 2014, Porridge and Rice had the funds to support a third school, and Lizpal Community School was selected. 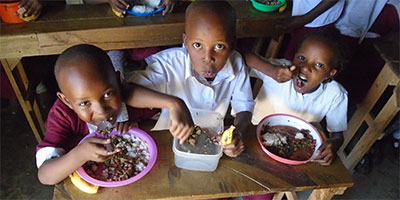 By January 2015 - Porridge and Rice was providing meals each school day for 1,050 school children living in the Nairobi slums.

Porridge and Rice have made real progress but with over 2.5 million people living in the Nairobi slums, there is still much more to do. By removing barriers to and providing resources for education, Porridge and Rice seeks to provide children in poverty with the skills to break the cycle.

No child asks to be born into poverty. They deserve help to break free from it.

All members and trustees are unpaid volunteers who give their time freely. In addition, trustees and members cover their own expenses including trips to Kenya. The result is that the overheads of Porridge and Rice are negligble; almost every penny raised from activities like the London to Paris bike ride to balloon modelling goes to people in need.

All members and trustees are unpaid volunteers who give their time freely. In addition, trustees and members cover their own expenses including trips to Kenya.

We have seven valuable team members on the ground in Nairobi who live in the Ngando Slum in the Dagoretti District of Nairobi.

Child hunger is widespread among school children in the slums of Nairobi. A black tea and a sometimes a mandazi (an unsweetened African doughnut) is a common breakfast with nothing for lunch. It is no surpruse that children frequently complain of stomach pain and nausea.

The Feeding and Nutrition program provides children with breakfast, lunch and a piece of fruit each school day. Breakfast is a local porridge known as Uji, and lunch is stew on rice with meat stew one day a week and vegetable stew the rest of the week. The fruit is seasonal so from March to April, it is usually bananas and in June, it is avocados.

Over 55% of the population of Nairobi live in areas designated as slums, and 94% of slum dwellers do not have access to adequate sanitation. Open defecation or a bucket simply emptied into one of the many drains running between shacks, is common place.

PaR provides lessons on worms and the spread of disease, and how to combat them through good health and hygiene practice.

In addition, PaR provides soap and water for handwashing, disinfectant for cleaning, and is working on raising money for better and more toilets.

PaR also runs classes for pupils and teachers to teach the importance and benefits of habits like hand washing, in the fight against disease and the promotion of good health.

Glad Kids
Glad Kids is the second school that Porridge and Rice partnered with in Kawangare.
Glad Kids gets no financial assistance at all from the Kenyan government.

Lizpal
Lizpal Education Centre was founded by Beth W in Kawangare.
Lizpal gets no financial assistance at all from the Kenyan government.

The schools in the slums are frequently no more than temporary shacks built with wood and tin sheets.They are small, dark, and frequently in poor shape. They have no running water, they seldom have electricity, and they rarely have toilets. Furniture is limited and in poor condition usually.

The first facilities task that Porridge and Rice undertook was to put electricity in Excel Emmanuel School. This school now has electricity in all its classrooms and candles are a thing of the past.

Porridge and Rice also built a kitchen at Excel Emmanuel when they introduced their feeding programme.

The teachers of the Community Schools in the slums of Nairobi are frequently dedicated and committed. They work hard and do their best for their pupils. However, what they can do is limited because very few have any formal training. The barrier to the teachers getting trained is a simple one - money.

The Porridge and Rice team are working on raising money specifically for the purposes of putting teachers through college and university to enable the teachers to provide a higher standard of education to their pupils.

The goal of the extracurricular activities program is to provide children in the slums with access to activities from art to sport that are not part of the official curriculum but have educational, social and physical merit in the development of the child.

PaR has started introducing fun games and exercise routines for use in PE lessons. In addition, PaR has introduced an inter-school games sports day that teaches children team and inter-personal skills, and promotes healthy exercise. PaR has begun to provide footballs and skipping ropes to PaR schools so that regular games and exercise can become a part of each school's activities.