The Rozy-Nanaa Foundation (Rona Foundation) is an NGO that works with widows and widowers on loss & grief and life re-entry, helping people let go of loss and rebuild their lives.
The Foundation runs the Wagoma Orphans & Widow's Centre in Bondo District and campaigns nationally for widowhood laws in Kenya.

Wagoma is a village in Bondo District, along the shores of Lake Victoria, 35 kms away from Bondo, with a population of 3500 people within the sub-location, and 238,780 living in 56,607 households within the district.

The children in this village still have limited access to education due to lack of basic utilities like clothes, food and other dignity materials, particularly for girl child, who often drop out of schools. Even if they are able to reach past primary education, few make it to secondary schools due to lack of fees and other social dynamics attributed to the impacts of HIV and AIDS and poverty.

Most of the children orphaned by AIDS have been taken in by extended family members. However, the large number of orphaned and vulnerable children is overwhelming this traditional copying mechanism. Elderly female caretakers or children themselves are heading many of these households and with no income, they lack resources needed to support these additional children and provide essential food, clothing and school fees. Conversely, for the children to cope and/or ensure the survival of their younger siblings, most orphans are being forced to find some sources of income.

The main source of income in the village is fishing and peasant farming, which is often affected by the erratic rain pattern. The village has 56 homesteads, with 74 orphans and 92 partial, making a total of 166 orphans in the tiny lakeshore village.

Our aim is to be a self-sustaining initiative.

We do not pay salaries to anyone in the organization.

Woe unto the African woman whose husband has been pronounced dead!  The many milestones that mark this journey will leave many speechless, astonished, fearful and crestfallen. Africans are categorized into tribes, and each tribe has its own culture, values and traditions that are often held higher than the laws of the land or the country’s constitution for that matter. When death strikes, in most cases the African man/woman goes back and relies on culture and traditions to normalize a situation whose intent and purpose only God understands, and can never be normal.

I hail from Kenya, and from the Luo people who are Nilotes and live along Lake Victoria.  Some of the Nilotes are found in Sudan, Uganda and the lakeshore regions. We truly value our customs and traditions. Traditions reign supreme.  In olden days we went as far as removing our lower teeth and the Dinka of Sudan and Acholi of Uganda create skin markings, just to show you how important tradition is to us. For a Nilotic Luo death is a bad omen, a curse that does not occur naturally and hence it must be followed by ceremonies to drive it away lest it return soon.

The numb, clueless widow begins to receive lessons soon after on how to act from as many diverse sources as there are circumstances and economic power. For instance, the widow must have a special plate to eat from and not mix with the others as soon as the news is out; if the plates are all the same color, hers must have a mark and all must know and use it to serve her food. The widow must only use her marked seat which is to be shared by no one until the day she gets an ‘inheritor’, a man whose sole duty is to perform sexual cleansing. They go ahead and tie a ribbon or some mark on the seat to inform guests to never sit in it. 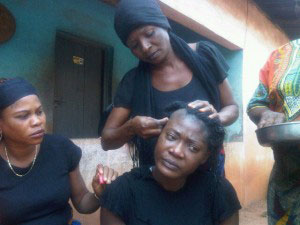 If that’s not enough on the fourth day after burial, the widow together with her children will be clean shaven with a razor blade to differentiate her from the rest of the community as she begins the 90 day mandatory mourning period prescribed by culture. In the olden days, she was not supposed to walk the paths, visit any home, go to the well or water point, attend any community gathering or meeting, nor shake hands.  She would only be seen wearing black and showing her clean-shaven head.  Sometimes the widow was made to wear her late husband’s clothes regardless of their fit for as long as this period lasted.

The young men on the seventh day will do a ceremony called, ‘tero buru’ (chasing death-will write some day on it) but basically means driving away death, with animals in a frenzy and going very far.  When they come back they enter the home with dance, song and chaos in a way that shows death will never return – it is a sight to behold! This ceremony is often so scary that children and women run and cry for accidents can easily happen. The more dangerous it is the better.

Where does it stop? It does not and will not stop for the widow and her children.  This marks a long journey to what organizations like Loomba Foundation, MWC and Rona Foundation denounce as widow stigma and abuse. In Africa, loss and grief and human rights are so intertwined that one hardly separates them. Will Africa one day see the need to wake up and know death is natural and non-negotiable and that we all must face it someday? If now HIV/AIDS is at this level, then I rest assured it is possible. The world must come to the rescue of the African widow. 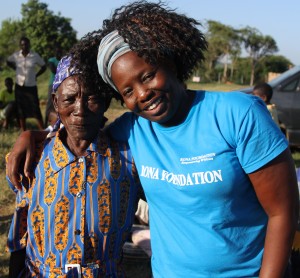 I was born in Wagoma Village and like many of the school kids today walked 3kms to attend school.  Both my parents were teachers that reinforced a high value of my education. Along with enjoying my education, my childhood was fun, as I participated in communal chores such as herding animals, collecting firewood, brining water from the late, milking cows.

Through child eyes in the 1980’s there seemed to be a togetherness of our villagers, as respect was unspoken but rued. I would later learn, of so many rules, and traditions that were unspoken but opened my eyes to the inhumanity that was actually happening.

As the 90’s approached my idealistic village, turned dark as death began to sweep the villagers by large numbers.  There was a new disease, HIV/AIDS around the world, which they called it ‘chira’ in my community, and it was killing my extended family and the rest of the community.  As a young girl, I saw our world change so much and yet my people remained still, paralyzed in customs or thoughts that could not change the situation. Most of the community’s young men were dying, which meant a large amount of children went orphaned, and soon I sadly realized they will never know the joys I knew as a child.  No one spoke up.  No one talked about the death.  I was 26 years old and asked to speak at these funerals.  And even though they laughed when I spoke, I was determined to continue to speak and bring back the homes that now have become graveyards.

A woman’s worth was the children she brought forth, better if they were sons. Discovering I was not able to bare children was of great trauma for me at this period. Mental, physical and emotional abuse followed, coupled with stigma that touched every part my life. I chose to walk away from the marriage. But in my community only death made people part. I had broken one of the unspoken laws. My losses began, my house was set on fire, my tailoring business burnt, I lost my government job and a educational scholarship; friends and family ostracized me. I learned first hand the plight of a childless African woman, and the pain of divorce.

I endured, and survived.  I even found love and married again.

My remarriage did not last long. At 32 yrs. of age in 2007, I became a widow. Shock and fear gripped me. My community said I carried a bad omen. Stigma and widow abuse set in. I would later realize that my culture had so many rules that I, as widow now, was not allowed to try to break or attempt to overlook. I began to question some of these and it marked my awareness campaign on widow abuse to date; what I was going through in my culture were abuses that noneone should have to go through after losing their spouse. It woke me up.

I closed my business, turned my house into a meeting place and started hosting fellow widows, sharing our grief, pains and supporting each other; and this gave birth to Rona Foundation.

I later bought land from a widow (pictured above), and started Wagoma Orphans & Widows Centre to re-build the perishing forgotten village, where I was born and brought up. I ended up with 166 orphans and more coming to feed on any given day. 85% of the population are widows and orphans.

I champion this ongoing awareness campaign, with an aim to achieve policy and legislation to ‘Stop Widow Abuse’.  The world is waking up to this silent calamity.  I dream of a day when my country will have Widowhood Laws and treat widows with equal human rights. And replicate the widows and orphans centre in other counties and communities to give widows a voice.