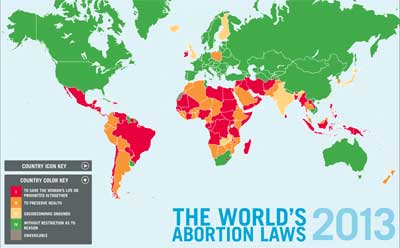 Brazilian women are fighting to prevent their government from 'decriminalising' rape.

Recently, Brazilian politicians belonging to “Bancada evangélica”, a kind of lobby from the “evangélical” church, approved a proposal that makes the government give money to raped women to not have an abortion (already provided by the law), arguing that the fetus is already a person with rights.

This proposal also says that the woman can be allowed to receive money from the government (also called by the population a “rape-grant”) to give birth to her baby, following rape  –  but only if the rapist could not be recognized in order to contribute to the child; the rapist now will be called not a criminal, but… a father!

The proposal was accepted in its first political round and now has to be passed through more two instances to become law.

Most important to note is that this proposal says that the rapist is no longer a criminal…rape will not be a crime, and the woman can’t have an abortion because the fetus will be more important than herself…she will be just a womb for the state, for the society; so if she does it, she can be jailed.

Second: she will have to meet her rapist again and make him assume the child as its legal father, in order to receive the money from the government.

But also this proposal can stop all the medical advances relating to stem cells: embryos will have rights – frozen embryos have rights, too.

Women suffering from life-threatening cancer will not be allowed to have treatment and an abortion; they have to wait for the baby born to have the treatment.

Currently, abortion can only be legally performed in Brazil if the pregnancy puts the life of the woman in danger or in cases of anencephaly, where a condition that prevents the normal development of the brain and the bones of the skull.

Our freedom is threatened because we can’t mention abortion, ways of abortion and rights of abortion…if this proposal becomes law. Could I myself respond to the government because of my past research about it here in Brazil?

I don’t know…but I will not have the possibility to mention my past research about abortion on my curriculum anymore.

With this proposal, rape is no longer a crime!!!! Sexual abuse will not be seen as a crime anymore!

Men could keep on raping us and we will always be the victims of this system.

This is the country which is more worried about the World Cup than about women’s lives.

And more important to note: men made this proposal! What about hearing the Brazilian women voices???

The proposal is formally called “Estatuto do Nascituro” – something like “Status of the unborn”. Yes, the unborn will have more rights than the women in Brazil!

This is the Brazil where we live!

This is the real Brazil that tv shows do not show.

Welcome to my world!

Details of the proposal, in Portugese